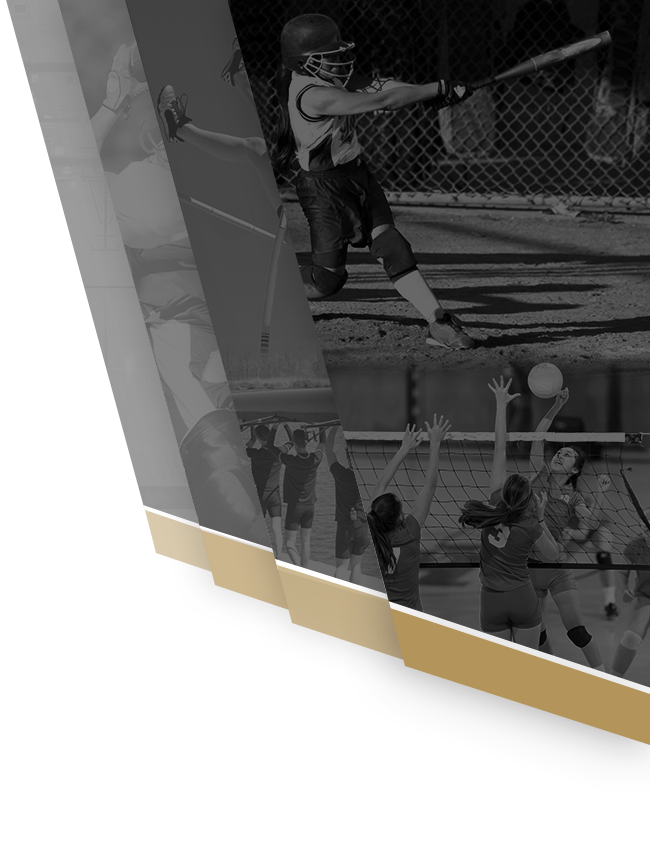 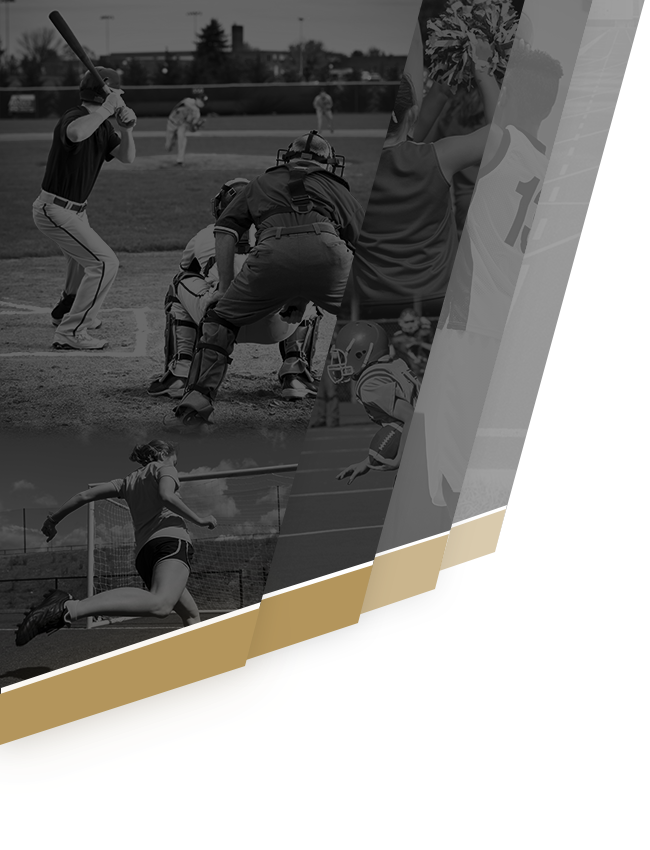 The evening started with a dinner for the inductees followed by recognition and presentation of framed letters during halftime of the Varsity Football game versus Allatoona High School.

The weekend was concluded with each inductee being recognized at the 2016 Sprayberry Foundation Black and Gold Sting Fling.

Congratulations to the Sprayberry Athletics Hall of Fame Class of 2016! 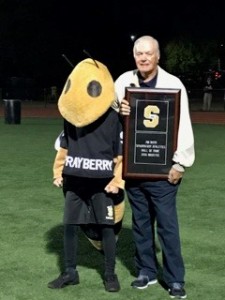 Jim Nash played baseball for the Yellow Jackets and graduated from Sprayberry High School in 1963.  He was drafted after graduation by the Kansas City Athletics in 1963.  He was named the American League rookie of the year in 1966.  He played for the Kansas City/Oakland athletics, Atlanta Braves, and Philadelphia Phillies during his seven seasons in professional baseball. 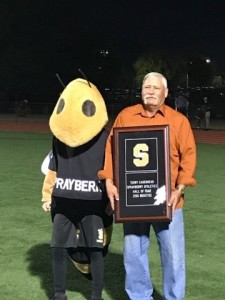 Coach Cadenhead came to Sprayberry in 1976 and took over the Varsity Baseball program in 1978.  In 27 years his teams were Region Champion five times.  State runner up two times and State Champions in 1995.  Two of his players made it to the SHOW and also two of his players played in the 1996 Olympics.  He was elected to the Georgia Dugout Club Hall of Fame and retired in 2005 with 520 wins. 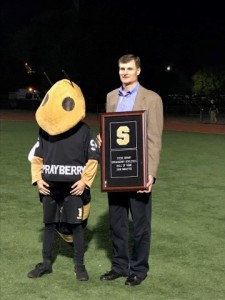 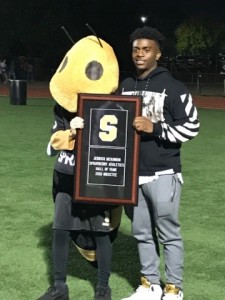 Jerick McKinnon graduated from Sprayberry High School in 2010 where he played football and ran track.  During his time at Sprayberry he was AJC first team all-state pick and Cobb County Touchdown club quarter back of the year.  He went on to play college ball at Georgia Southern University finishing as third on the all-time rushing list finishing with 42 total touchdowns.  Jerick was selected in the 3rd round by the Minnesota Vikings and is currently the starting tailback. 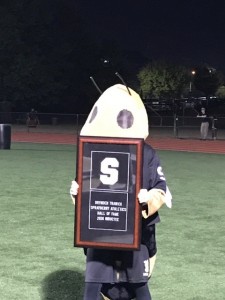 Brynden Trawick graduated from Sprayberry High School from 2007, where he played football, basketball, and ran track.  He attend college and played football for the Michigan State before transferring to Troy to finish out his college career.  As a senior he was named to the All Sun Belt Conference team.  He signed with the Baltimore Ravens as an undrafted free agent out of college.  He played three seasons with the Baltimore Ravens and is currently playing for the Oakland Raiders. 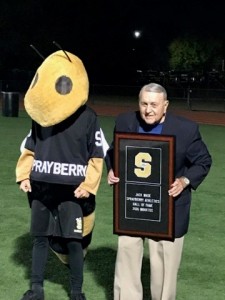 Coach Jack Wade built the foundation for a successful and winning football program at Sprayberry High School.  He came to Sprayberry in 1959 as the head football coach and assistant principal to take over a struggling football program.  In 1965 he led the Yellow Jackets to the state tournament.  His contributions as an administrative leader in the school and proven impact on the character and lives of young people led to his appointment as principal of Sprayberry High School in 1996. 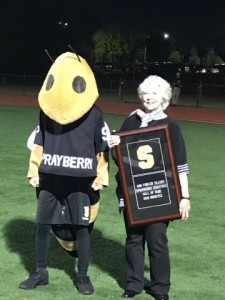 Anne Fowler-Tillery cheered, competed in gymnastics, and played softball for the Yellow Jackets and graduated from Sprayberry High School in 1956.  During her time at Sprayberry she was the only acrobatic cheerleader in Georgia’s 7th District.  She was a gold medal winner in the 1956 Georgia Gymnastics Competition.  She lettered in Cheerleading, Drama, and Softball during her years at Sprayberry. 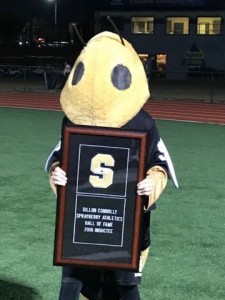 Dillon graduated from Sprayberry High School in 2007.  He was a three time state champion in both the 100 breaststroke and the 200 Individual Medley.  Dillon excelled in academics and athletics during his time at Sprayberry.  Dillon went on to swim at the University of Southern California and became a school record holder and team captain.  He represented the USA on the on the 2006 National Junior Team and competed at the 2008 Olympic Trials.  Dillon was training for the 2016 Olympics when tragedy struck and Dillon severed his spinal cord while surfing with friends.  The qualities that made him a champion in the pool are still called upon today as he copes with this injury. 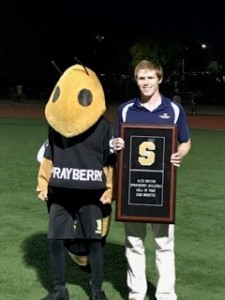 Alex Hudson wrestled at Sprayberry from 2005-2009.  He had 185 wins and 5 loses which is the school record.  He was a four time Cobb County Champion and three time Region Champion.  After Sprayberry he went on to wrestle at the University of Tennessee at Chattanooga and lettered four years and won the southern conference and NCAA National Tournament as a junior and senior.  Alex Father Robert Hudson and Cousin Mike Hudson were inducted into the Sprayberry Hall of Fame in 1978 and 2002.

Sprayberry Booster and “Voice of the Jackets” Frank Wigington 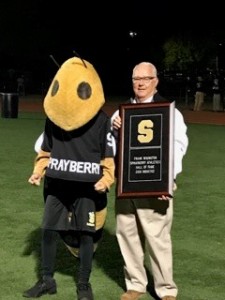 Frank Wigington has been a long time booster and Voice of the Jackets for football, basketball, and baseball for many years.  He is a 1970 graduate of Sprayberry and also saw his children walk the halls and graduate as Yellow Jackets.   In additional Frank is serving as the inaugural President of the newly established Sprayberry Foundation.